It’s been a week since the fun of my fourth Stargate Convention ended…and all the better to have the benefit of time to regroup my thoughts and organize my photos and memories to share with my wonderful readers.

In case you don’t follow me on Facebook (seriously, you should in the very least follow this blog on Facebook), I was on vacation the weekend of August 13-17, visiting Rosemont (a village in the Chicagoland suburbs) for the Creation Entertainment Official Stargate Convention 2015.  It’s the yearly convergence of about 500-plus Stargate fans on the Westin O’Hare, and it is an amazing experience.  It’s not for everyone, but who it is for never walks away disappointed.  Ok, so I’m sure some people walk away disappointed, because you can’t please everyone and their nitpicky existences, but I have yet to meet them.

The journey began on Thursday morning, August 13, aboard a NJ Transit train bound for 30th Street Station.  I only take selfies on two occasions – recitals and Convention/Vacation/Day Trips.  So I did this at the home train station.

Then I got on the train and watched Mystery Science Theater 3000: The Movie on my Kindle Fire until I got to Philadelphia.  Yes, it was a movie within a movie, and it’s awesome.  It’s also the only MST3K-related thing I’ve ever paid for, aside from the stuff I bought at Wizard World back in May.  You Tube and Hulu are great for freebie viewing, but no internet connection on the train, so you do what you have to do…download the movie in advance.

Upon arrival at 30th Street Station in Philadelphia, I dragged my stuff to the SEPTA Regional Rail Station (up the ramp, which is not Equalizer Walking Boot friendly), got my round trip tickets for the Airport Line, and waited through a fifteen-minute delay for the train.  Despite that, I still made it to Philadelphia International Airport with about 2 hours and 15 minutes to spare.  Security was a quick breeze (despite being held at Security for additional screening on my boot), but I got through fine and went to my gate.  I had lunch at Salad Works, and went to wait at the gate…only for my flight to be delayed 45 minutes due to mechanical issues.  The plane apparently blew a tire returning to the airport from San Juan.  So my 1:45 pm flight became a 2:30 flight.  The problem turned out to be an easy fix, and we were boarding at 2 pm, taking off at 2:30 pm.  Despite the delay, we arrived at Chicago O’Hare Airport at 3:15 pm (Central time, of course), a mere fifteen minutes behind schedule.  During my delay, my friends kept me company with Facebook messaging, which devolved into quoting Airplane.  And if that wasn’t the best way to ease into the delayed flight, my arrival was the best part.

And then there was my greeting from my friends who had already arrived at the hotel, and later by my other friends, who arrived for the restaurant we were going to enjoy that evening.

Dinner, drinks, conversation, and hilarity happened at this amazing place:

Located at the MB Financial Park down the street, it is one in a grouping of restaurants located around an outdoor concert venue.  The atmosphere was loud, but the food and company was great.

And the drinks had gummy candy in them.  It’s called Grape Crush, and yes it was alcoholic.  And it was so good.

The visit to The Sugar Factory was capped off by fireworks in the outdoor concert venue, a return to the hotel for conversation and laughs, and then to bed for the most rest I would get in three days.

Not that I’m complaining.

Friday morning started off with McDonald’s breakfast while camping out in the lobby with my group, the arrival of our local friends, and well…this. 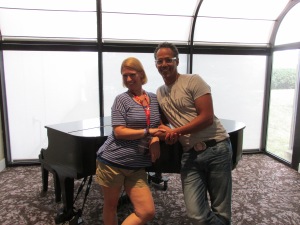 When a System Lord wants to hold your hand, you do as he says, without question. 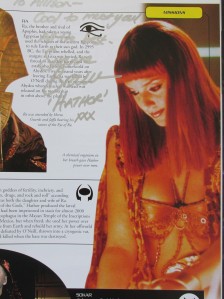 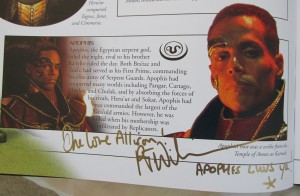 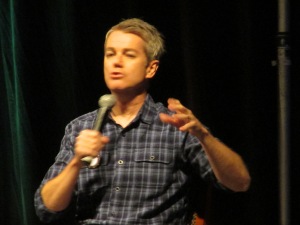 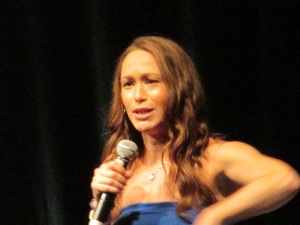 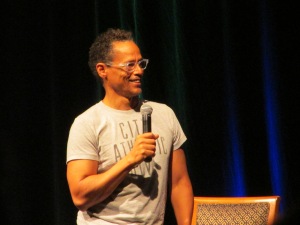 We took advantage of the room clearing out somewhat after the Cabaret to move to the back and riff the karaoke performers.  Let’s just say when you choose “American Pie,” and you’re one of three smartasses singing “The Saga Begins” (Weird Al Yankovic’s version of “American Pie”) in the back of the room, you know you’re having a great time.  I’m convinced we all lost it by the time “Living in America” was sung.  Especially when my friends were singing and laughing hysterically.  Friday ended with us getting kicked out of the ballroom so they could close the Con for the night.

And I hugged a System Lord in a photo op.  One love, Apophis…or can I call you “Apopy” or “Pops”?

Saturday’s day was a little more packed activity-wise, but it’s what we expect from Saturday.  It started early (8:30 am) with a Meet and Greet Breakfast with Fandemonium’s core of Stargate novel authors, Sally Malcolm, Jo Graham, Laura Harper, and Melissa Scott.  It was free, aside from the breakfast, but the blueberry pancakes were incredible, and so was the conversation.  We discussed all things Stargate, talked about non-Stargate life, and above all, I met people outside of my group.  Even made a new friend in someone attending the Con for the first time.

The fun then moved to the ballroom for panels – Dan Payne (later joined by Alex Zahara as co-hosts for the convention), Andee Frizzell, who dragged me up on stage for her panel after asking attendees to talk about their favorite Convention experiences…so she could re-enact them.  I figured I would be up there for five minutes.  It wound up being thirty minutes, and everyone has the pictures to prove it. 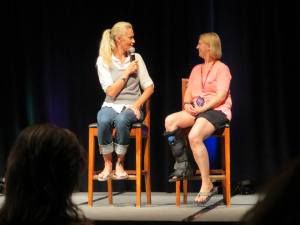 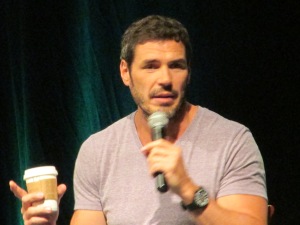 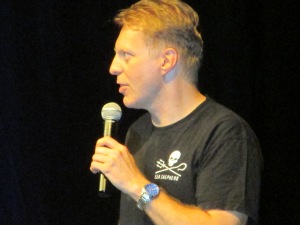 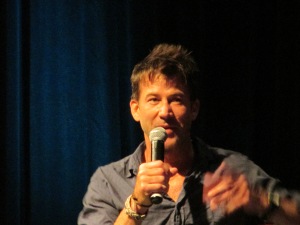 Particularly of note was Joe Flanigan’s panel, as he did it solo, and anyone who has attended conventions (this one or otherwise) where he is appearing knows he never does panels alone.  Not because he’s diva-riffic or anything, but because he’s shy.  I’ve been to four Cons, and each time, he’s always had someone with him (in 2012, he was with Paul McGillion, 2013 with David Hewlett, and in 2014 with both McGillion and Hewlett).  But this time, he flew solo, did a great job, and was upstaged by a fart machine taped under the chair. 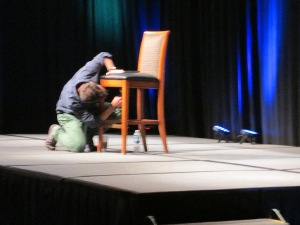 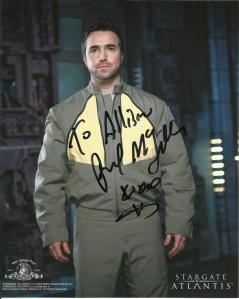 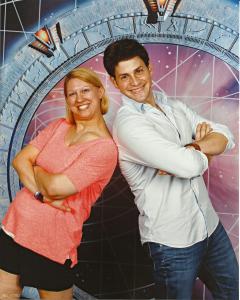 David Blue – way too cute, but wanted to do a second take because of his “stink face” expression!

Joe Flanigan. I’m not sure what hold this man has on me (ok, besides the fact that he’s really nice to look at), but I can’t bring myself to break his Con face.  I saw other people managing to do so, but I was unsuccessful.

During autographs, we ordered Giordano’s pizza (a tradition we started last year during Saturday night autographs) and camped in the back of the ballroom until our row was called.  As we were mostly Row M, we all went up at the same time.  By 8:30, autographs were done, and we were hanging out (perhaps loitering) in the ballroom when we were (once again) kicked out so the room could be closed up for the end of the day’s activities.  And of course, we cleared out, but since it was 8:30 pm and not 12:30 am, we moved our party to the lobby, where we bought ice cream from the gift shop (I should add that since we were not Gold ticket holders, we couldn’t attend the Gold Dessert Party), were occasionally visited by others (including our friends Susan and Melanie, who was nice enough to bring us homemade cookies).  The lobby provided much entertainment for our group, with my friend James (A Gold ticket holder who chose to stay with this group, despite having access to the dessert party) provided much of the entertainment.  He had our friend Samantha hysterical and gasping over his Barry Gibb impression, did monkey walk impressions, and referred to an attendee as “Captain Creepy.” “Da-da-da-da-da…ewwww” became the catchphrase of the evening (it’s still being said).  We broke off for the night at 12:30 am by piling into an elevator.

Sunday came on fast, with panels beginning early in the day.  Since the majority of the guests appearing on Sunday were people I wanted photo ops with, this was the day I spent the most time in front of the awesome Stargate backdrop.  My first photo op was at 9:15, shared with my friend/confidant/partner in crime/fellow creative genius Melanie, who came up with this idea, as inspired by Peter Kelamis’ dialogue in a Stargate Universe episode.

Do you ever really want to tell pretty girls to get off your lawn?

Aside from auctions (including the Sea Sheppard auction, and the auctioning off of this amazing quilt made by my friend Samantha – it nabbed $700 for Sea Sheppard)…

…there were panels by Peter Kelamis, Paul McGillion and Rachel Luttrell, the Fandemonium authors (unfortunately, I missed this in favor of photo ops), Corin Nemec and Cliff Simon, and last but certainly not least, one of my reasons for being there (the other two reasons – Amanda Tapping and Ben Browder – both cancelled), Michael Shanks. 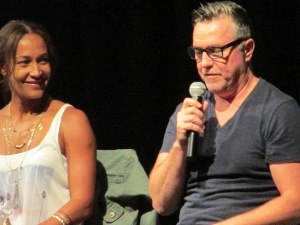 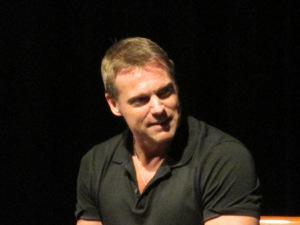 Shanks apparently has this magnet that draws in questionable questions from overly excited women.  Last year’s takeaway from the whole thing was the ability to research ascension, and this year…gold lame pajamas and women who write fan fiction asking insane questions.

It’s the official Stock Photo of Questionable Discussions.  And girls who loved Megasnake.

Of course, there were autographs by Rachel Luttrell, Michael Shanks, Corin Nemec, and Cliff Simon…

…and then there were photo ops!

The book is an inside joke if you’re familiar with Michael Shanks’ character.  It was also the Greatest Find Ever at the Franklin Institute last spring.

Don’t call us…we just look cool together.  And we’re not sure if Paul McGillion is fight-ready.

I wanted to do something else, but he wraps his arms around me and I lose all inhibition.  I think time becomes irrelevant at that point, but I’m not sure. I’m sure I was going to tell you my theory of everything, but I forgot.  Because hug.

This was my idea, and Melanie was too happy to join in.  We got two takes out of it – here’s mine.

And here’s the photo I gave her.

Poor Shanks.  He thought it was going to be a nice photo op, not a cabaret performance.  Joke is on him – this was supposed to be done with Ben Browder.

Kicking it with bad legs – Corin “Parker Lewis Can’t Lose” Nemec and I show off our fighting stances.  Have boot, will rock it! 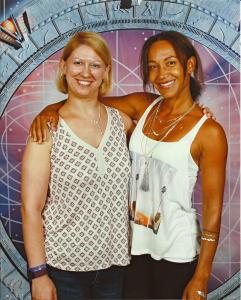 And Rachel Luttrell, who apparently has the same female hero influence that Amanda Tapping, Torri Higginson, and Teryl Rothery have on me.  There is no posing.

I should add that I’m missing a photo op – I was late to pick up my shot with Cliff Simon, so I’ll be posting that at a later date.

But, of course, we had the best photo op of all at the close of the convention weekend.

Endless appetizers at TGI Fridays ended the best Con weekend I’ve ever been to (and totally beat up last year’s Con experience).

And there you have it, my amazing weekend of going in the ‘Gate for the fourth time.  I’m up in the air about next year, but I’ll see what 2016 has in store for me.  Part of me wants to branch out, the other part wants to be with the family again.

These women and their questions.