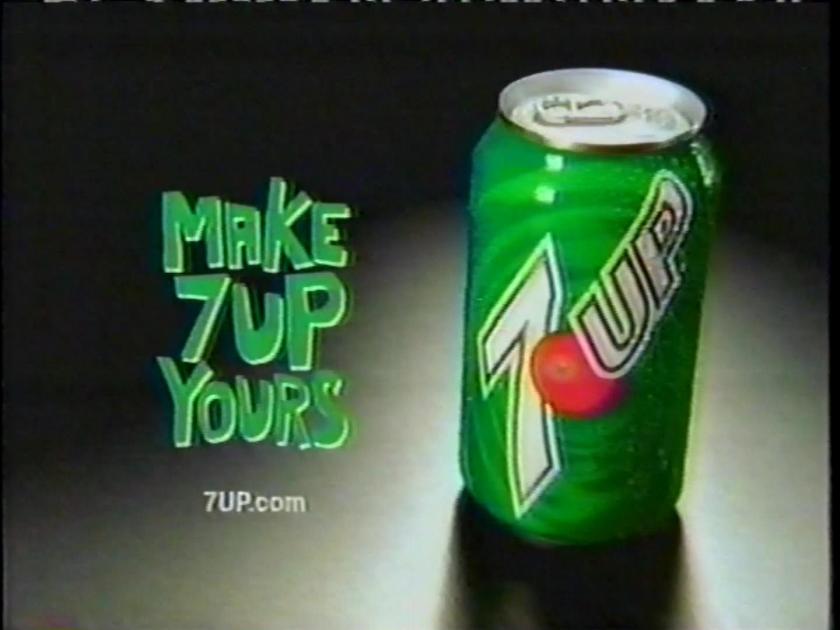 Or 7-Up, whichever you choose…as long as it isn’t dishwater, rancid milk, wallpaper paste, chum, or bile.

I’ve said this a few times about the early 2000s – it still has all the trappings of the late 1990s. Websites were featured on commercials, but those commercials still looked and felt like the 90s, down to the music, clothes, and the overall aesthetic of the latter half of the decade. AND, I didn’t have any of these commercials in my collection…until now!

Today’s commercial block comes from Sunday, April 1, 2001, recorded during The Simpsons episode “Simpsons Safari,” on WNYW Fox 5 in New York. This actually wasn’t my tape – I found it in my brother’s VHS collection, long after he moved out. It was unlabeled, so I put it in my own collection and figured I would eventually go through it.

It’s been about ten years since I found it, which is never too late to make a cool discovery.

Anyway, featured in this commercial block:

The Big Bang…and a even bigger chicken, things that are already awesome, made more aweseome when squared (!), me at Boot Camp, 7-Up “taste tests” (remember the “Make 7, Up Yours” commercials?), and movie sequels no one asked for!

There’s promos, movie trailers, and a hub bub of a show “about nothing” coming to syndication on this network the next day.

I’m so used to uploading such large commercial blocks, that seven minutes worth of commercials is…short. And so many of my uploads are from NBC, that it seems strange and out of place to have anything from the local Fox station recorded.

Yeah, I was 18 and man, am I glad that part of my life was a lifetime ago. As for the commercials, I wish they still looked like this!

Perhaps we’ll have more that look like this for Flashback Friday.