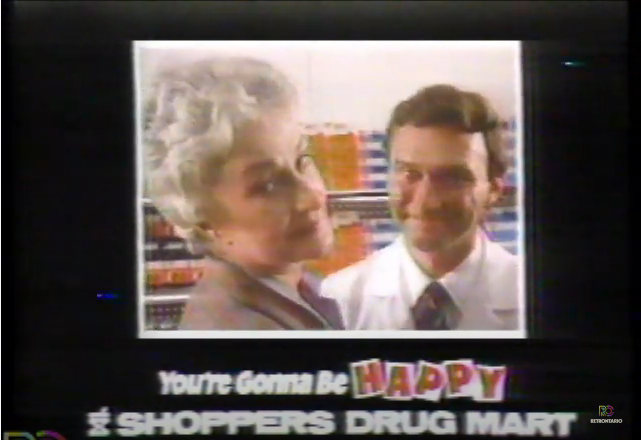 Happy to help you!

Today’s offering for Throwback Thursday actually made up my mind for me, the minute it showed up on the “Recommended” offerings on YouTube. And I figured we could all use a few laughs, given the world and what it throws at us. I know that I’m all for anything that gives a good laugh.

We need stuff like this in these crazy, uncertain times!

Today we go back to the years between 1985 and 1992, and visit our friends to the north and their pharmacy of choice, Canadian pharmacy chain Shoppers Drug Mart. And who better to lead the charge on a satisfactory shopping experience than a true Golden Girl herself, Bea Arthur!

Witness the many faces – and bargains – of Shoppers Drug Mart, from marriage to Santa Claus, to caring for infants and photographing children, to Seniors Day, anniversary bashes, movie tickets, and wanting WRINKLES!

Seriously though, this is quite the collection of commercials. And no, they’re not mine, but the collected works of this YouTube playlist, from the likes of retrontario, Retro Winnipeg, Retro Ty: The Pulse of Nostalgia, bmuz, Retrobox, Betamax King, robotsea2009, CatchThatTaste, and Chuck D’s All-New Classic TV Clubhouse. It’s a great collection, and super delightfully Canadian!

And is always a good thing!

She knows to ask her pharmacist for everything, to stock up on the “hottest” toy of the year, and capture a kid’s good side!

Shoppers Drug Mart Corporation is a chain of pharmacies based in Toronto, Ontario, Canada, and operates 1307 stores in nine provinces and two territories as Shoppers Drug Mart, and 56 locations of its sister chain, Pharmaprix, in Quebec. Established by pharmacist Murray Koffler, the chain started out when Koffler, at the ripe old age of twenty, inherited two Koffler’s Pharmacy locations. By 1962, Koffler expanded this two-store operation to seventeen locations, and changed the name to Shoppers Drug Mart in the 1970s, with the name derived from the location of its first actual store in this name, Shoppers World Danforth.

Today, the chain is owned by Loblaw Companies, with the Koffler family retaining ownership of Shoppers Drug Mart’s international chain, Super-Pharm, which operates in Israel and Poland.

As I said, Bea Arthur was the spokesperson for Shoppers Drug Mart during the 1980s, running concurrently with her time on The Golden Girls. Apparently, she took a page from Dorothy Zbornak’s wardrobe for these commercials.

Also included, her biting Dorothy/Maude Findlay wit, prevalent throughout her interractions with “Nicky.”

After leaving The Golden Girls in 1992, the show moved to CBS and was retooled as The Golden Palace, with Arthur making a guest appearance. That show ran for one season. Bea Arthur continued making guest appearances on shows, talk shows, and specials through the 1990s and into the 2000s. She even returned to the stage in the 2000s, with a one-woman show and various one-off and short run performances until 2006.

A private person, Bea Arthur passed away from lung cancer on April 25, 2009, at the age of 86. A veteran of the United States Marine Corps. Women’s Reserve (she was honorably discharged at the rank of staff sergeant in 1945!), stage, screen, television, and yes, Canadian television advertising. She left behind groundbreaking characters in an era of strong female leads gaining ground on their male counterparts. And knowing the group of amazing female leads her legacy resides in, she was still very much one-of-a-kind.

And admittedly, she was always my favorite “Golden Girl.”

So, in seven years’ worth of television advertising for a drug store chain, there was one important question left unanswered…

How do you feel about older women?