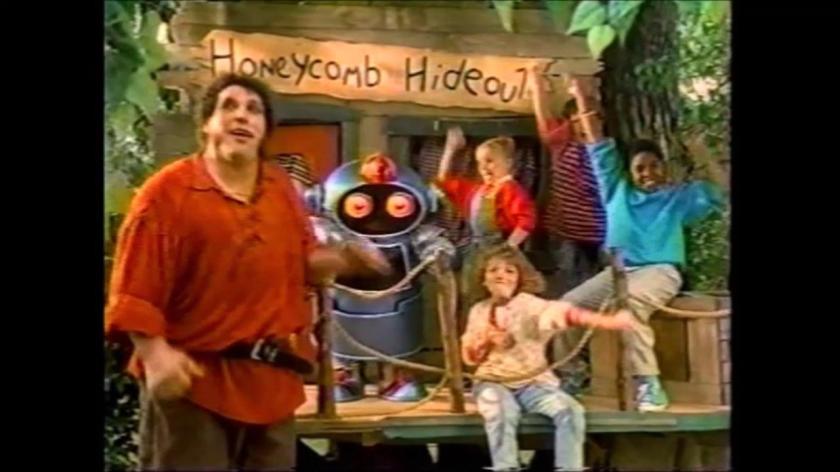 It’s not small…no no no!

The other night, when I was planning the commercials I would be using for this week’s Throwback Thursday and Flashback Friday, I was editing the commercials out of their respective blocks in bed. My husband was sitting next to me and said “Is that Andre the Giant?!”

So I said “yes, and he is part of Flashback Friday!”

Just like today’s commercial’s product is “part of a complete breakfast!”

His reaction is probably the same one most kids had in 1989-1990 to watching today’s commercial.

So yes, today’s commercial comes to us from the magical year of 1989 (but found among a block of commercials from early 1990), and involves the ever-exclusive “Honeycomb Hideout,” which I’ve been too old to join for the last 20-plus years.

The Honeycomb Hideout is a source of magic, amazingness, and all the Honeycomb Cereal one could eat.

Adults aren’t allowed, and it is always visited by someone.

In this case, a giant!

A very…Andre the Giant! And yes, he is hungry!

Oh, I’m geeking out over here. Just watch the commecial!

Honeycomb Cereal has been “part of a complete breakfast” since its introduction by Post Foods in 1965. The cereal is honey-flavored corn, shaped like honeycombs, measuring 1.5 inches in size. Sadly, it was discontinued in 2008

The Honeycomb Hideout was the cereal’s main advertising campaign during the 1970s and 1980s, and always featured a very hungry visitor, in search of a “big cereal.” When introduced to the cereal, it turns out they’re actually quite friendly, even joining in to sing the jingle…

André René Roussimoff, better known by his wrestling name as “Andre the Giant,” was one such visitor to the Honeycomb Hideout during this advertising campaign, among football players, a roller derby participant, and another giant, this of the superhero world.

Andre was a professional wrestler and actor, who was known for his size, his ability to drink 100-plus beers over the course of several hours, being bodyslammed by Hulk Hogan at Wrestlemania III, and his role as the Fezzik in the much-loved 1987 movie The Princess Bride. He retired from wrestling in 1990, making sporadic appearances until 1992, and passed away in January 1993 from Congestive Heart Failure. He was a real-life giant at 7 feet, 4 inches, but as it has been said, he was a gentle and generous individual.

So, was the Honeycomb Hideout just a clever marketing campaign? (Besides the fact that there is a house you can rent called “Honeycomb Hideout” on Oceanview Beach in Virginia Beach, Virginia.)

Nope, it was also a club for kids!

Like the Burger King Kids Club, Eva Joia Girls , and even Planet Lunch, the Honeycomb Hideout had exclusive incentives for kids!

During the 1980s (not sure how many years), kids could be part of this club, which had badges, a membership card, and special toys on specially-marked box tops.

So it had a big taste, big names that terrorized kids (initially), and a club?

Even Andre the Giant approved!