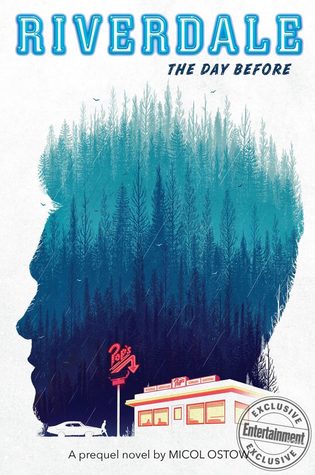 The prequel story of the event leading up to the pilot episode of the CW series Riverdale gets the novel treatment in Riverdale: The Day Before.

Riverdale: The day before by Micol Ostow

Beneath a town built on its wholesomeness and pep, lies mystery and secrets.

It’s July 3rd, and Riverdale – The Town With Pep! – is preparing for Fourth of July. Jughead is going to be showing the campy 1996 summer blockbuster Independence Day at the dilapidated drive-in (a traditional summer treat for the town), Archie is preparing for a covert meetup with his music instructor, while hiding his secret from everyone in the guise of going to spend Fourth of July with Jughead, with whom a once-solid friendship had become strained, Betty is off in Los Angeles engaged in a journalism internship at Hello Giggles (which, as I’ve come to find out, is a real website), and Veronica is a New York heiress apparent/Vogue intern/rich “B” of a girl whose life is (as she believes it to be) perfect, if only for the growing unease around her in regard to her family.

Beneath all the facade of everything being perfect, things are about to change, both in Riverdale and in New York for our soon-to-be-transplanted-there character.

I started watching Riverdale in the spring, after a random decision (and nothing really to watch at the moment). I’d started watching the pilot on Netflix in the fall of 2017, and was intrigued, but never really went back to it. I’d finished the first season (which is my favorite of the three) in about a week, averaging 2 episodes a day for a short season. I was hooked, and considering that this is a show aimed at an audience 20 years younger than myself (I’ve never hidden the fact that I am in my mid-30s), I was pleasantly surprised at how interesting a show about modern teenagers could be (I felt out of touch as a teenager in the late 1990s, so you can imagine how I feel watching a teen-focused show in 2019). For me, the facade a squeaky-clean town giving way to a darker side beneath the surface intrigues me more than teen drama. The show is well-written, as was this book.

I love these types of prequels – knowing the unsaid things that happened right before what you did eventually see, and how all of the actions of individuals lead up to the series. We’re treated to text messages that suggest rumblings of trouble, indications that the town with pep isn’t as “peppy” as it is thought to be, and that some characters…aren’t as squeaky clean as we think they are.

I’m looking forward to the fourth season (I finished the third a few weeks ago), despite the strangeness of the third season’s storyline (a thinly-veiled “Dungeons and Dragons”-style game, but with more sinister consequences for the players, as well as the Heaven’s Gate-type cult of The Farm – a little reference back to a newsworthy event during my teenage years, which was an interesting plot in the season). Likewise, I’m looking forward to the next book (the prologue is previewed at the end of this story).

If you like to know the story behind the characters leading up to the time you meet them in the television series, I highly recommend this book.

View all my reviews