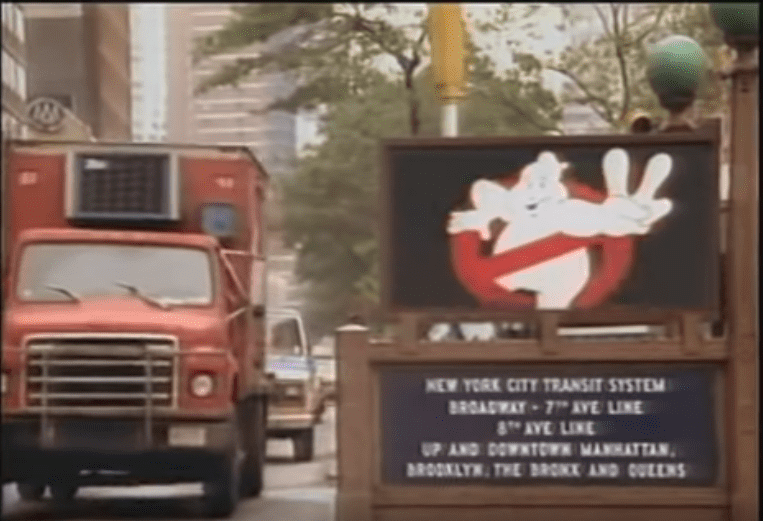 Music Monday is too hot to handle, too cold to hold, and today’s song is gonna be another one of those funky ones!

I’ve never felt so incredibly white writing the lyrics for a Hip Hop song in my life.

If I were singing it, I would feel even more white.

Enough of that, more of this!

In 1984, four men in jumpsuits, toting giant backpacks and cool tech, believed in a city plagued by a supernatural presence.  In fact, they fought to contain and eliminate the presence in the city. They were heroes, and they had their own song, complete with a celebrity cameo-filled music video.

Anyway, five years later, in the year 1989, the foursome of city-saving gents is reduced to a punchline, attending kids birthday parties where He-Man is way better.

I hope those snot-nosed poster children for birth control/abstinence (especially the director’s son – er, the birthday boy) were referring to the Filmation version, and not that terrible DiC version of He-Man from 1989.

Yes, the OG song from five years earlier was used (especially during the birthday party), but a rising star, fresh from his time with New Edition, was breaking out hits, including one for the soundtrack to this sequel movie five years later.

“On Our Own” is a 1989 single from Ghostbusters 2, performed by Bobby Brown, a few years after leaving New Edition, and a few years before marrying Whitney Houston.  Brown made a cameo in the film as a doorman at Gracie Manor (he asked where he could get a Proton Pack for his brother), and his song, like its famous predecessor from the previous film, shows that lightning strikes twice, even if it is overshadowed.

The music video, like “Ghostbusters” before it, features celebrity cameos.  This time around, they came from the likes of Jane Curtin (not playing the role of an “ignorant slut”), Malcolm Forbes, Iman (before she was married to David Bowie), Victoria Jackson (then famous for being “the blonde chick that did handstands on the Weekend Update desk” on Saturday Night Live), Sally Kirkland, Rick Moranis (who of course reprised his role as Louis Tully in the film), Joey and Marky Ramone of The Ramones, Christopher Reeve, Lori Singer, Doug E. Fresh, and Donald Trump (yes, you read that right – don’t let it detract from the video, it is soooo good!).

“On Our Own” was written by prolific songwriters L.A. Reid, Kenneth “Babyface” Edmonds, and Daryl Simmons (who all contributed instruments and backing vocals for this song).  As a “sequel song,” it is really good.  It has a true Hip Hop sound of its time, and doesn’t feel cheesy and novelty.

I like “Ghostbusters,” but that song has become a bit of a novelty by comparison to “On Our Own.”  The lyrics definitely fit the profile of the Ghostbusters trying to bring back their image from five years ago, even if they have to do it without the help of the media that adored them after the events of the previous film.

The music video, like the song, stands out in a good way.  See why, by clicking play!

“On Our Own” reached #2 on the Billboard Hot 100, prevented from reaching the top spot by both Prince and Richard Marx (the former for “Batdance” from another big summer blockbuster about a hero, and the latter for “Right Here Waiting”).  The video was filmed in the spring of 1989, and released on June 22, 1989, six days after the film was released on June 16th.  The film, like the song, was a commercial success.  A direct sequel to the film will be released next year, but it leaves to be seen who will perform a new song for the film.

Who am I kidding?  They’ll use Ray Parker’s song again.  Because the 2016 movie did.

At least Bobby Brown got a Proton Pack for his brother…