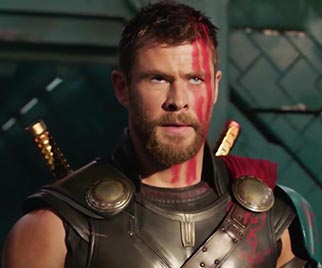 I promised not to scream during the film, and I held true to that promise, even when (cameo not to be named because spoiler alert) removed Thor’s wig – er – gave Thor a haircut, I still didn’t scream.

I’ve made no secret since I saw Avengers: Age of Ultron that Thor is my favorite – the ultimate big dumb animal of a Norse God who brings on the Thunder, swings a giant hammer, and whose muscles have muscles.  But as I came to learn after seeing this film, Thor has become more human as he spent time on Earth, and obviously picked up a sense of humor from spending too much time with the Avengers.  I never knew he had it in him to be a funny badass, but yeah, he does.

If Guardians of the Galaxy taught me anything about Marvel film soundtracks can truly be badass products of music awesomeness.  If Marvel movies in general have taught me anything, even the opening logo has badass music to its credit.

Anyway, there was one song played in the trailer that I figured would either be in the movie, or just wanted us to know where Thor came from and that he meant business.  In other words, I figured it was just cleverly being used for the trailer.

Nope, it figured into the movie rather prominently!

“Immigrant Song” is a 1970 Led Zepplin song, referencing Norse mythology, war, and Valhalla.  It is from their third album, Led Zepplin III (so, Chicago isn’t the only group to utilize Roman numerals?), and was written during Led Zepplin’s 1970 tour of Iceland, Bath, and Germany, the opening date of which happened in Reykjavík, Iceland (guess who had to keep looking that word up?  Not good at all of them, folks!).

“We weren’t being pompous … We did come from the land of the ice and snow. We were guests of the Icelandic Government on a cultural mission. We were invited to play a concert in Reykjavik and the day before we arrived all the civil servants went on strike and the gig was going to be cancelled. The university prepared a concert hall for us and it was phenomenal. The response from the kids was remarkable and we had a great time. ‘Immigrant Song’ was about that trip and it was the opening track on the album that was intended to be incredibly different.”

Six days after the group appeared in Reykjavík, Led Zepplin performed “Immigrant Song” for the first time in concert during the Bath Festival.  It would open their concerts from 1970 until 1972.

The song was one of their few single releases, and was done so on November 5, 1970 (hey, almost exactly 47 years to the date of Thor Ragnarok’s release!), and was praised for its rhythms and double-tracked wordless vocal crossings.  The song reached #16 on the Billboard Hot 100 for 1970-1971.  It has also seen many many covers between 1987 and 2016.  But the version used for this film is the original.

In 2017, the song was given a remix and a new life in the Marvel Studios film Thor Ragnarok, which was released on November 3, 2017, used during key scenes in the film.  This song is every bit the embodiment of Thor, and I’m sure if someone handed him an mp3 player and told him “you REALLY need to hear this!  It’s all about you!”, he probably would agree wholeheartedly. After he asks what this device he’s using is, in his own special way.

Though I will say this, as I said before – Thor is becoming a little more human with every movie, while still holding on to his roots and legacy.

And that remixed version!