I’m sitting here at my desk, pretty much assuming that I know what a hangover feels like, even though I’ve never had one and am nothing more than a social drinker.  It’s about 15 minutes before I start work, so at least I’m able to give myself the proper time to collect my thoughts and check my work email before my day starts.

But hey, another trip in the books!

My boyfriend, James, moved to my area in June.  A few days after he moved here, I went to his house after work, as has become routine since he moved here.

He was watching TV in his home office (which is now the den – the office got moved to one of the other two bedrooms), and one of the first things he said that day was “I saw a commercial for Dorney Park, and looked it up.  Have you ever been there?”  The last time I had was in 1996, and before that was a few years earlier (I think 1992 or 1993).  I know the park had been through changes in the years since I’d been there last.  Heck, it was different even in the years since this commercial I have in my collection, as featured on Flashback Friday on September 18, 2015 (and note how I don’t do voiceovers anymore!)…

My last visit to Dorney Park was in 1996, the summer before I turned 14 (we were there in 1992, when I was 9 years old).  We loved it, but we hadn’t been back, but we’d been to Disney World twice and Busch Gardens in Williamsburg, VA in the years following my last visit here.  So when my boyfriend expressed excitement about a commercial he saw, I jumped all over the opportunity to go!

Armed with a waterproof camera and nerves of steel (on the slides, not on the stairs having to walk up – heights have me rattled!), I went on the slides that Wildwater Kingdom had to offer.  The weather was perfect – not too hot, not too humid, and very very sunny.  While I didn’t take photos on the slides themselves, I took them from other vantage points. 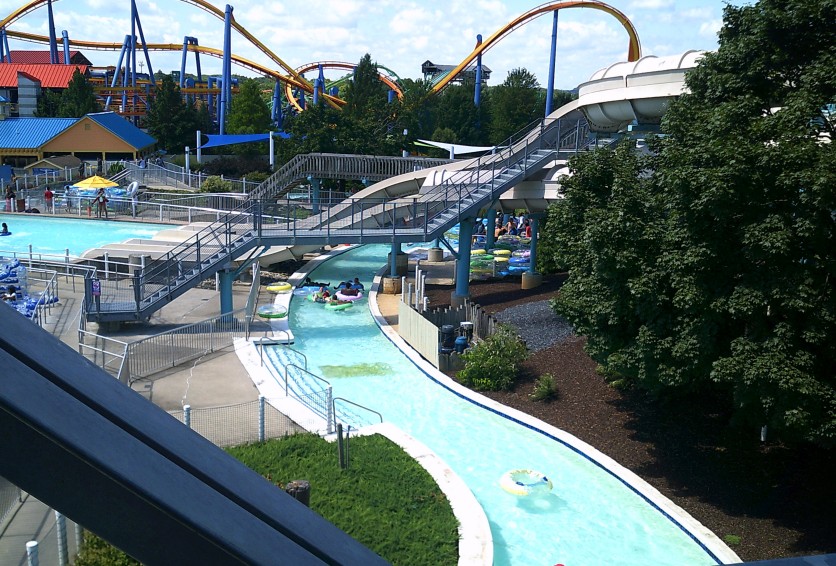 Runaway River, for when you just need a break, but can’t go into the kiddie areas, because, well, no kids and not small enough.

The Python Plummet, which puts riders in a “pod” while standing on a trap door.  As a countdown signals your impending descent, you wait patiently for what you know is going to happen.  Then suddenly, the bottom drops out from under you, and you plummet into a slide.  You zip at 30-35 mph (I checked) toward a soaking end.  450 feet of slide, 65 feet up to start…and the worst part is the beginning.  You don’t have time to think, and you may as well prepare to hold your breath during the countdown.

The best part of this thrill was watching others go before me, as the group in line had a blast laughing at the people on the ride.  Joke is on everyone laughing, you’re going to meet that same thrill shortly.  But I admit, it is fun to see the looks on everyone’s faces when the trap door drops out. 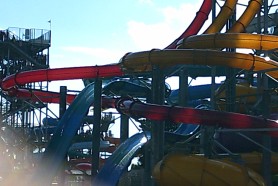 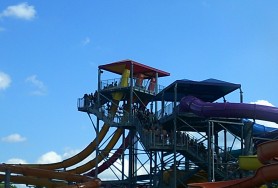 Running right next to Python Plummet is the Boa Blasters and Constrictor, which is a tube slide (see the large picture directly above this text for a side shot of the slides).  The Boa Blasters have shorter paths and cool drops, but the Constrictor leaves those other Boas in the dust.  A dark ride leads to winding and ominous trips through, as you glide through in your tube.

The Aqua Racer reminds me of the Toboggan Racer at Disney’s Blizzard Beach.  The hardest part for me was getting the momentum to go – I tried to push off with my feet, but the water pressure just wasn’t getting me started.  But once I got it going, it was a breathtaking (seriously, so much water in your face) ride down. 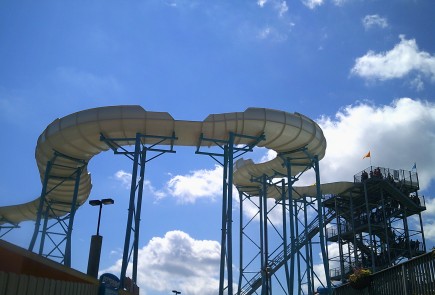 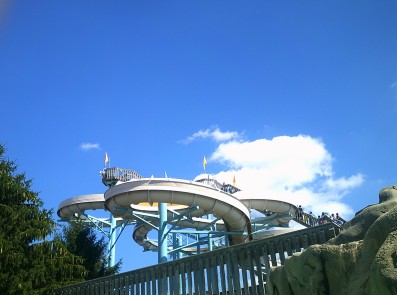 Have you ever been in one of those really large tubes with either a few strangers, or a few of your closest buddies in the whole world?

I’ve been on the Busch Gardens Williamsburg version, and the Disney’s Blizzard Beach version, but I don’t think I was on this one in 1996.  This one is Aqua Blast, and I forgot how intense this slide is.  And when I say intense, this thing REALLY whips up the sides.  My boyfriend and I screamed loudly and each of us had turns going up the side of the wall.  Holding the handles doesn’t feel safe, but it is.  I’m assuming.  I survived, so obviously this was’t that bad.

We went on the Speed Slides (no pictures in my collection) and in the wave pool, which is exactly what the title implies…

I actually did miss a few slides during the day – Patriot’s Plunge (I think we missed that area), Jumpin’ Jack Splash (it looked like everyone who went on it struggled to go faster), and Lightning Falls (again, I’m convinced we missed a few things!).  We also didn’t go on Wildwater River (I went on this in the past) or Cascade.  Again, not sure how we missed these.

The boyfriend and I had a blast, and after all was said and done, we’d spent five hours on the slides (including two trips up to Python Plummet, two on Constrictor, and one on Boa Blast).  Aside from a lunchbreak, we kept the momentum going until we knew we had a two-hour trip ahead of us, and that we wanted to get home.

And there you have it, my latest experience!  Have you ever been here?

Until the next big adventure…

The excitement.  You can’t stop yourself!

Related: This Line Jumper… (Not a true story, it is about a cautionary water park sign)