Welcome to Week 16 of the NFL Flashback.  While this week is technically not the last week of the regular NFL season, every team has a bye week.  So I’ll be ending the flashback at 16 weeks.

Before I get all misty and nostalgic (ok, more nostalgic than this has the right to be, especially when it’s all about nostalgia), if you’ve been around for the entire “season,” I thank you!  It’s been a great run and I’m happy that there has been readership.  While I could have continued for an additional week, I felt this was the best finale I could come up with for the flashback, so I hope you enjoy this one.  This is for all of you…ok, all five of you.

All of that said, if you haven’t already seen the other articles, here they are:

Week 10 – The Return of Dick Butkus…Commercials

Week 15 – The NFL At Christmas

And now, with that behemoth of a list compiled, let’s get to the grand finale!

I really hope Dick Butkus has a good sense of humor.

No, I’m not convinced someone has shown him any of the times he has been featured (or made cameos) on NFL Flashback over the past since it became a thing on this blog, but I’m still holding out hope that he has a sense of humor.

Dick Butkus’ football career brought on plenty of acting work, beginning in 1971 when he appeared in the film Brian’s Song as himself in an uncredited role.  A steady stream of film, television, and commercial work followed him when his time with the Chicago Bears ended upon his retirement in 1973.  And like all of those commercials I spotted Butkus in that have been features on NFL Flashback, there was something else I found him in back in 2009, and didn’t even know that six years later, I’d not only have a blog, but I’d be watching football, and writing a feature for my blog about football and football players in “hey, remember this?” footage.

I’m referring to the three appearances he made on this show.

Yes, that’s right!  Dick Butkus (the actor) made three appearances on MacGyver, playing the role of Earl Dent, an ex-convict who strives to go straight, but finds the job rather difficult.  He made his first appearance in the season six oddity of a MacGyver episode, “Harry’s Will,” makes a second appearance later that season in “High Control,” and in the seventh season episode “Split Decision.”  Butkus, in fact, was not the only ex-football player to make an appearance on the show.

So without further ado, and in order to avoid tangents of any kind, let’s grab some rubber bands and paper clips, and take a look at the three-part harmony of Dick Butkus appearances on MacGyver.

But first…this is REALLY, REALLY important…

Oh I love that.  So much win in that one minute and twelve second clip.

No, I didn’t count that. 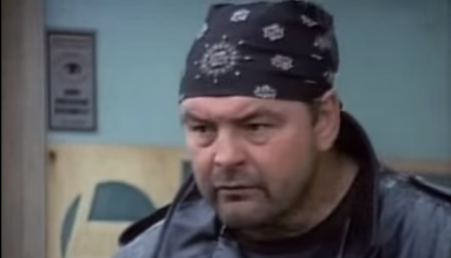 So as I said, Dick Butkus (sans mustache) played a character named Earl Dent, whom MacGyver befriended in the season six episode “Harry’s Will,” and in this episode, he’s a criminal out for himself, along with a scary biker chick named Big Mama (played by Wendy O. Williams, who will haunt my nightmares tonight in the worst way).  Oh, and he headbutts Abe Vigoda in order to steal away the apparently precious Nomad left to Mac in his grandfaher’s will.

When I first saw this episode, it rivaled the cheesiness of some of the early episodes.  It was a departure from the norm of a typical MacGyver episode, and while it didn’t work as a concept, you have to admire the originality someone really tried to bring to the episode.

Earl Dent will be back…later in the season in “High Control.”

In this episode, Earl is attempting to reform himself, and by reform himself, he gets a job at Chicken Habit (see “Harry’s Will” for the connection), but old demons surface, and Earl has to make a decision: go forward on the right path, or go back to a way of life that got him in trouble in the first place.

It’s also an opportunity to see how many facial expression screenshots I can come up with.  Plus that hat.  🙂

And in his final appearance with season seven’s “Split Decision,” Dent is in need of money, so he does what any reasonable person would do…he wants to go pro in boxing.  Oh, and he’s trying to get custody of his bitchy fourteen-year-old daughter, Veronica, who insists on being called “Roni.” 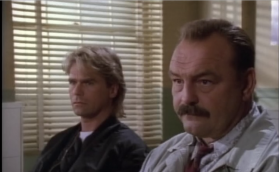 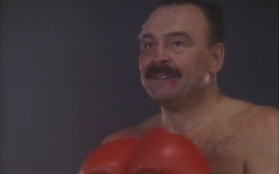 I’m not going to tell you Butkus’ appearances on the show are highlights of the series overall.  By season six, the show still had it’s moments of spark (see “Blind Faith” for one of the most beautiful and emotional episodes of the series), but season seven definitely was a low point for the show overall.  A shame really, considering that it started off a bit of a mixed bag that quickly became exciting and fun in that 1980s kinda way.  But if you want to see Dick Butkus try his hand at acting alongside The Man with the Glorious Mullet, these episodes are available on Netflix and Amazon Prime.

Plus, it’s MacGyver, who doesn’t love the idea of him?!

And there you have it, the appearances of Dick Butkus on MacGyver.

I never said it was pretty.

I’d like to thank everyone who has visited the site and read 16 weeks worth of NFL Flashbacks, mostly featuring Dick Butkus.  Because he is loved on the Flashback.

As always, thank you for your support and readership, it is much appreciated.  And for those of you with teams who still have a chance, I envy you.

Let’s just say Mr. Butkus has no clue how lucky he is.

He just totally gave the look of “oh jeez” thanks to me and my silly jokes.

She looks so unhappy to be standing next to him. Prehaps she’s not a Blackhawks fan?  And isn’t he a Calgary fan on this show?

(This is probably the worst-timed screenshot I’ve taken in my history of screenshots).

Note: I actually have some other moments featuring other former footbal players, which I will definitely highlight in a future article.