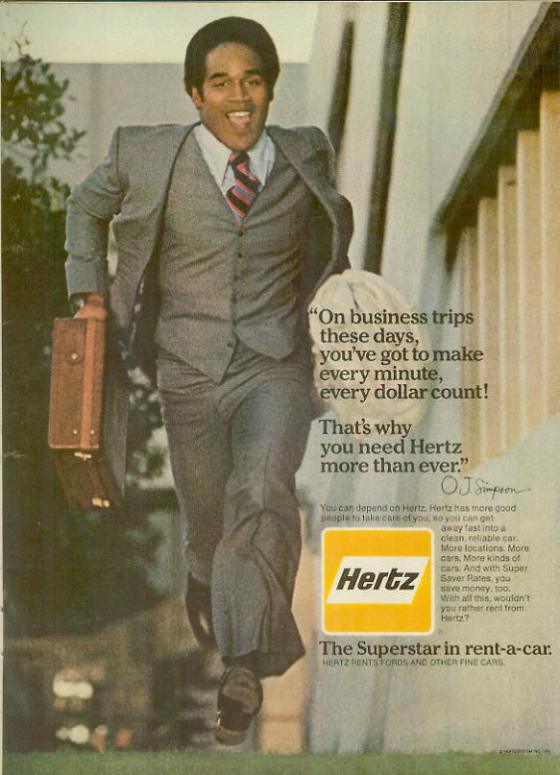 Welcome to Week 8 of NFL Flashback!

If you’re keeping track, we’re now halfway through the regular season, and this subject has been a rather easy one to write about.

But first, as always, if you’re just finding your way to NFL Flashback for the first time, you need to get caught up!

And now that we have that out of the way…

I was starting to worry for about a second there that I was only going to be able to find commercials and other things for this blog series that featured Dick Butkus, whom I hope and pray has a sense of humor.

By the way, we’re not finished with him yet.  But he gets another week off from this, so we’re going to let yet another ex-football player take the reigns for week eight.

Rather, we’re going to let him jump over seats in an airport instead.

From 1975 until 1994, O.J. Simpson was the prominent spokesperson For Hertz, famously jumping over airport seats and into the hearts of American consumers.  Chances are, if you grew up during this time (as I did), you remember OJ’s commercials.  By the 1980s, he partnered up with golfer Arnold Palmer, and in the 1990s, Jamie Lee Curtis joined in on the advertising fun.  And in 1994…well, we all know what happened then, but it also marked the end of OJ’s time with Hertz.

But for 19 magical years, OJ was The Face of Hertz, so let’s not dwell on why the partnership ended, and instead, let’s take a look back, shall we?

“Nobody does it better…”

OJ jumps over a theater rope to “Nobody Does It Better.”  It’s at that exact moment that we are all OJ.

Lots of turning the hell around in slow motion to make a point, to the same song.

In a hurry?  There’s an express key drop-off for that!

And there was that time he argued with Arnold Palmer about what made Hertz great.

You know how I said Dick Butkus was getting some time off from NFL Flashback?

Arnold Palmer disses OJ Simpson.  Perhaps he should stay where he is, as far away from OJ as he can get…

OJ has his health.

And Arnold should value his life, especially his status as a living person.  Which could have been revoked if he angered OJ enough.

Of course, this is the non-exhaustive list of OJ trying to convince you to rent only from Hertz, but it’s a nice little tribute of sorts to the ads, which are funny in that good old nostalgic way.  It was a time before OJ was a punchline, and let’s face it, we miss those days.  ALOT. I know I do, and of course, it’s always nice to look back.

And there you have it, week eight of NFL Flashback.  We’re officially at the halfway point of the regular season, and I’ve got more surprises coming up!

Dick will return.  Just not next week.

Seriously, can someone let me know if he has a sense of humor?