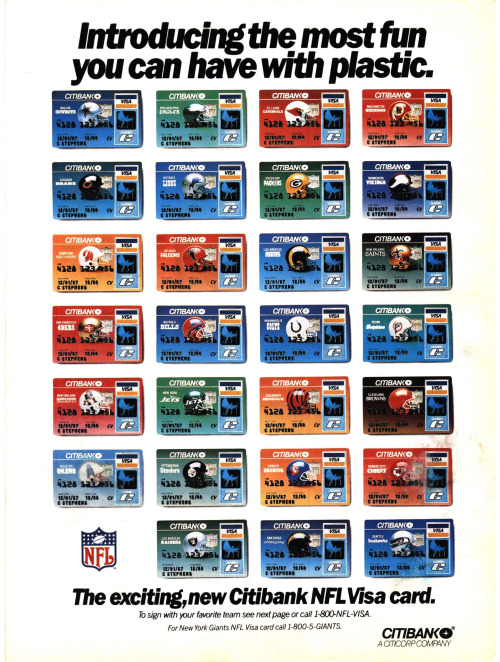 As Week 7 of the NFL’s regular season winds down, I was going ahead and deleting the files from my computer that I used for this week’s post, when I realized I had a few things in the folder that I wound up not using.  They didn’t fit the topic of the post, but were flashback-worthy advertisements nonetheless.

And since everything nostalgic has a place here…why not give them a place? 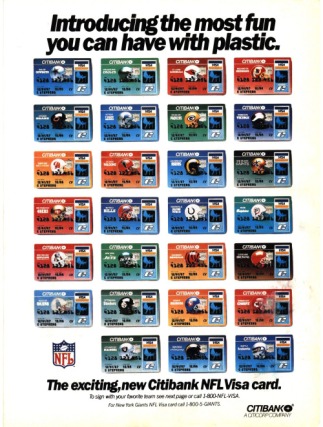 Citibank is a New York-based bank (hence, Citifield being where the Mets call home), but in 1988, they offered credit card designs for everyone, regardless of their team preference.  However, if you are a Giants fan (like me) and wanted a Giants card, you needed to call 1-800-5-GIANTS.

In this National Community Bank of New Jersey advertisement, the Giants are welcomed to their own brand-new stadium (the former Giants Stadium) in 1976 after many years of stadium sharing (most notably, at Yankees Stadium, and for a brief time, Shea Stadium while renovations were occurring there).  It’s the place they called home until 2009, when Met Life Stadium became their new home (same location, just a new stadium).  As for National Community Bank of New Jersey, they were acquired in the 1990s by the Bank of New York.  Even though they’re just letting you know that there are 48 branches in the area, they’re happy to have the team in New Jersey.

They’ve never left.  And neither have the Jets.  But that’s ok, because it’s not called Giants Stadium anymore.

And there you have it, a few extras from my week seven file folder.  And now I can delete it and call it a week.

And since the Giants won yesterday, it was a great week seven.