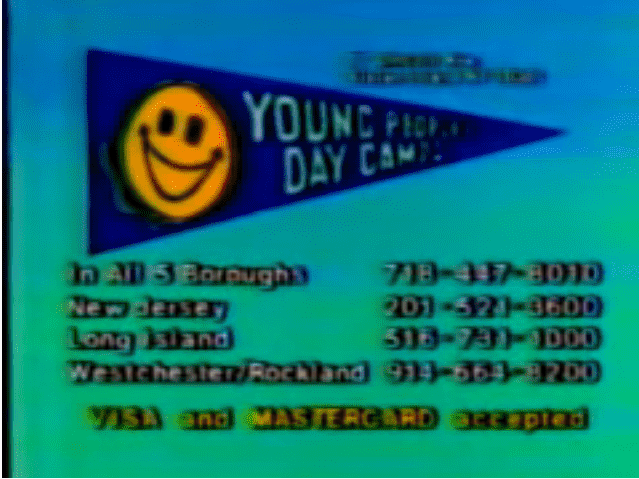 Ahhh, onto my neck of the woods, and MY nostalgic childhood!

Let it be said that no matter where you grew up watching television, there was always a few local commercials that aired frequently – sometimes the same one for years – and managed to stick with us, eventually going dormant in our brains, but suddenly finding their way into our consciousness.

Growing up in the New York City media market (living approximately two hours from Manhattan), my excessive television-watching youth was full of Mount Airy Lodge, Milford Plaza (the Lulla-“buy” of all Broadway!), Action Park, that one Cats commercial that ran for roughly 500 years, and today’s commercial of choice. This one was the how you knew summer was coming, because it focused on getting the New York City kids (the ones who actually lived in the five boroughs and Northern New Jersey) involved in day camp.

I mean, Action Park commercials also let you know summer was coming, but this one was the less dangerous way to enjoy summer…unless Action Park was a field trip.

And the commercial always involved this talking smiley face balloon that in no way made you think you were high.

Young People’s Day Camp was established in 1972 in the New York City area, giving kids between the ages of four and fourteen (the age varies by location, but originally was for kids 6-14 years old, as well as with a teen program) a fun-filled camp experience for as little as two weeks, and as many as eight weeks. Located in the five boroughs of New York City, South Westchester, Nassau, and Suffolk in New York, and Northern, Central, Ocean, Monmouth, and Mercer Counties in New Jersey. The aim of Young People’s Day Camp was (and is!) to help children “grow” intellectually, physically and spiritually in a fun environment. Transportation door-to-door was included in the cost, and kids always got t-shirts, banners, and other cool goodies.

The commercial shown during the 1980s and early 1990s – the one I frequently saw as a kid watching WPIX in the afternoons – involved the balloon telling us all about the camp and what fun activities they do, while reusing the same footage for years!

That balloon, those kids in short shorts, the activities – all of this looked like so much fun. I didn’t go to day camp as a kid – we usually played with our friends, went to the lake, the movies, the mall, and had sleepovers. My brother and took swimming lessons one summer, and the summer after fifth grade, we took recreation activities through our high school’s youth program. And once in a while, I wanted to take summer dance classes. But as far as camp went, neither of us participated. Looking back, I don’t remember ever being interested in camp. But these commercials always made it look fun.

To this day, Young People’s Day Camps continue to operate, and since even this commercial aired in all its Talking Balloon Leading the Way glory, it has grown and expanded in New Jersey. I haven’t seen their commercials on television in years, but there are updated versions on YouTube, and the kids still wear those smiley face balloon t-shirts in the commercials!

I think if I didn’t remember anything else about the commercial, that balloon certainly filled in the gaps.