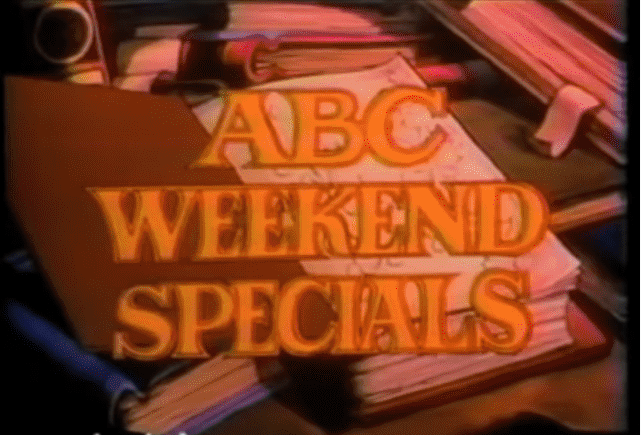 Children’s novels adapted for television were not just a CBS thing. In fact, they started out as part of ABC’s Saturday morning lineup!

From Reading Rainbow to the short-lived (and critically-panned) interstitial Hooray for Reading!, children’s books and television seemed to live in harmony. Over on CBS, Bob “Captain Kangaroo” Keeshan had a segment on his show that later became a full-fledged series of fully-animated episodes focusing on then-contemporary children’s stories, lasting for four years, and for several more in reruns years later. However, over on ABC at the same time, and even before CBS, PBS, and the short-lived interstitial about reading, there was another series focusing on novels, both in full-animation and live action, and it aired on Saturday mornings!

Reading is a Trip!

ABC Weekend Specials was an anthology series airing during ABC’s Saturday morning programming block, from September 10, 1977 until August 30, 1997, for seventeen seasons and 132 episodes. Unlike its counterpart over at CBS, some stories took two or three parts to tell the entire story, and the episodes were either fully-animated or live action, and produced by various studios, among them Ruby-Spears, Marvel Productions, Churchill Films, ABC Circle Films, Hanna-Barbera, Scholastic Productions, DIC Entertainment, ABC Entertainment, Focus on the Family, and the BBC, among others.

The series was hosted by several different people, and puppets – Michael Young (whose career started at QUBE, the great television experiment in interactivity from the 1970s) from 1979 until 1981, Willie Tyler and Lester from 1981 until 1984, and then Cap’n O.G. Readmore, along with celebrity guest co-hosts, from 1984 until 1989. Readmore also did Public Service Announcements for the network that aired on Saturday mornings and, like ABC Weekend Specials, encouraged reading.

I remember this song so well!

In addition to his hosting duties during the 1980s, Readmore (in animated form) starred in five episodes of the series. Otherwise, the rest of the episodes were adaptations of children’s novels, and the seasons varied in length between four and fourteen episodes a season. This was usually due to how many episodes a story took (usually two or three). This was the series that introduced Teddy Ruxpin in a format other than a talking doll, aired the films featuring The Littles, and adaptations of Beverly Cleary’s The Mouse and the Motorcycle books (the adaptation of Runaway Ralph starred Fred Savage!), Judy Blume’s Otherwise Known as Sheila The Great, McGee and Me (I think anyone who went through Catholic education in the 1990s remembers watching this at least once!), a female version of Tom Sawyer and Huckleberry Finn starring Drew Barrymore (!), and even Bunnicula (one of my favorite reads in fourth grade) got the ABC Weekend Specials treatment.

And that’s barely scratching the surface of how many stories got adapted into ABC Weekend Specials, as some of the Afterschool Specials episodes geared towards younger viewers were repackaged and rerun as weekend specials.

The series, in addition to books adapted for television, also aired special non-book episodes from 1993 until 1996, airing as ABC Saturday Morning Specials in the “weekend specials” timeslot. These specials focused on sports (Wide World of Sports for Kids), music, money (including showing the inner workings of an ATM!), science, Earth Day, and a Schoolhouse Rock special that concluded the entire series in September 1996, with reruns airing until August 1997.

The series had several openings, with “The Pop Up Book” being the longest-running of the series, from its introduction in 1977, until 1990.

From September 1990 until September 1994, the theme was “reading is magic,” and the design takes on early computer animation mixed with live action elements.

The final opening sequence, from September 1994 until 1997, emphasized “adventures in reading.”

I’m not sure how many of these episodes I’ve actually seen during my childhood, at least, during their airings in this programming block. I saw the Mouse and the Motorcycle episodes in school after they aired, and the Adventures of Teddy Ruxpin was a proposed pilot episode that, due to the cost and difficulties of the format (the style was done in the style of Disney’s Welcome to Pooh Corner and Dumbo’s Circus), was a standalone special that aired in two parts instead.

But as we know, there wound up being plenty of uses for that horrifying Teddy Ruxpin costume.

You know, besides those intros and outros on the videocassettes for the animated series.

I only found out while writing about Otherwise Known as Sheila The Great (one of my favorite third grade reads) that there was a live action adaptation of that book shown as a weekend special. I remember the movie and TV series based on Blume’s “Fudge” books (loved those stories too), but somehow Sheila Tubman having her own one-off special slipped past me. To be fair, it aired in 1991, and I didn’t read the book until a year later. Of all things on YouTube, this is not one of those “easy to find” things.

While I do remember this series, and read more of the books featured here than on CBS Storybreak, I remember that series better, but it may have everything to do with that theme song and how memorable it was.

I mean, it was stuck in my head for three days last week, so yeah, memorable.

Since some of the episodes actually made it to home video, I saw them in other places (specifically, school), but I don’t really remember ever watching ABC’s Saturday morning lineup to the time of day the weekend specials aired.

Other than the one episode I really want to see (seriously?), there are quite a few ABC Weekend Specials episodes on YouTube. This playlist is pretty complete, with a little filler, but otherwise, the concept gets across well.

Do you remember ABC Weekend Specials, or read any of the books featured as episodes? I love to know your memories of the series, and the books you read. Did you see The Adventures of Teddy Ruxpin or The Littles here? I always love to know your stories and memories. Comments are always appreciated too!

And do you remember Cap’n O.G. Readmore and his persuading you to read a book, ’cause reading is a trip?

And did it ever change your life?