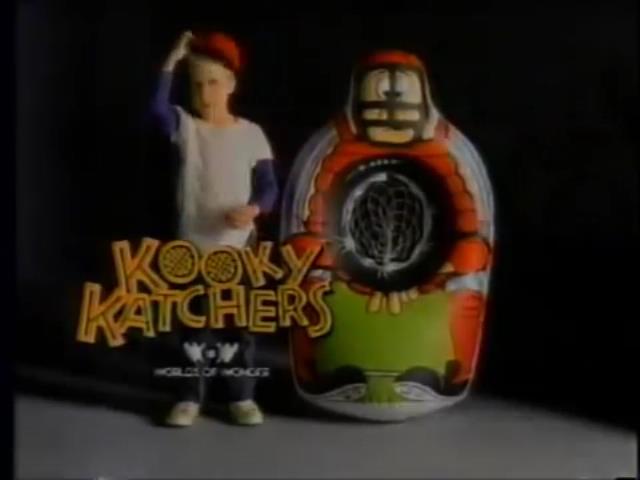 May I suggest a “SUBSTITUTION!” for all those times playing catch or basketball fell short of your expectations?

This week’s Throwback Thursday takes us back to 1990, to revisit some toys you may remember.  I have a particular fondness for this theme, as archiving my own collection, as well as other commercials I’ve acquired over the years, have brought back many great memories.  Further, my years of writing at Retroist have also helped me re-discover my youth, one obscure toy at a time.

By 1990, Worlds of Wonder was in the process of selling off its existing inventory, without developing any new toys.  The company had declared bankruptcy in 1988 following the stock market crash on October 19, 1987 (my fifth birthday is synonymous with Black Tuesday), and its creditors were operating Worlds of Wonder in receivership from 1988 until the end of 1990.

One such toy they were promoting in 1990 (which was incredibly late in the company’s life) was Kooky Katchers, which were inflatable sports sets meant to stand in for children playing catch or basketball.  This type of item still exists today in various forms (and with this name), but this was the OG, and Worlds of Wonder could lay claim to it.

In today’s commercial, dogs that can’t catch a ball, as well as children posing as “The Human Basketball Hoop” prove to be terrible playtime partners for baseball catch and basketball, respectively.

Instead, a “SUBSTITUTION!” solves all problems.  That substitution being the Kooky Katcher! 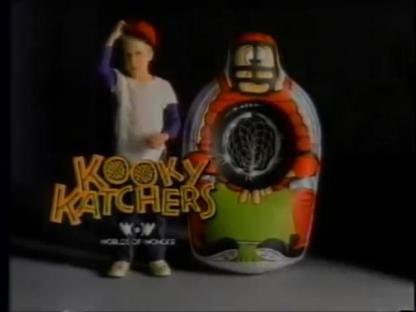 I particularly love how the basketball net looks like he was inspired by the Los Angeles Lakers.

So, while Kooky Katchers are still a thing in solitary sports play, the OG is the stuff of secondhand internet shopping finds.

In fact, eBay has two listed, but neither one is Worlds of Wonder’s version.  So I’m guessing these are a bit rare 29 years later.

We’ll see how tomorrow’s rare toy choice fares, both in “remember me?” and secondhand availability tomorrow on Flashback Friday!