It happens once in a while!

If you came by on Thursday and Friday, you probably sat down to a meal with The Davis Family, which always includes the use of 4C products – specifically breadcrumbs and Parmesan cheese.

In the late 1980s (I’m guessing circa 1987) until the late 1990s (again, guessing), 4C Foods promoted its product line featuring a very minimalist approach – no music, all hands, torsos, and no faces, as well as tight shots of the product being endorsed while we listen to a family having their conversations around a product. 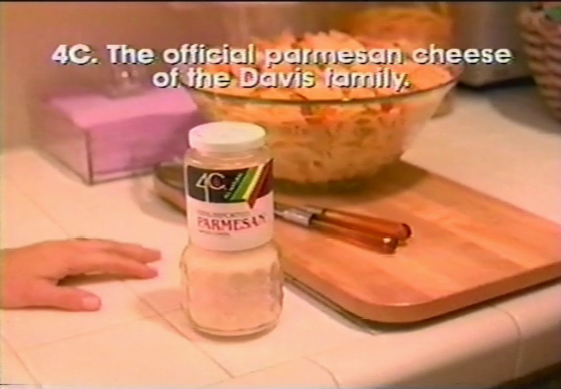 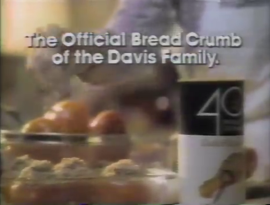 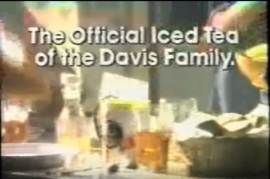 For the most part, the commercials were just that, but later on, the family actually seemed to take on the compensated endorser role (as depicted in Friday’s commercial).  I’m not sure when the commercials ran until, but they seemed to go away after the late 1990s.  In fact, I don’t think I’ve seen a 4C commercial since then.  Not that I actively search for them, but I haven’t seen them.

The Davis Family not only promoted grated cheese and breadcrumbs, they also promoted 4C’s line of drinks – specifically, their iced tea (assuming that was the only drink at the time 4C manufactured).  I dug through the archives for the drink commercials (I don’t have any in my collection, just the three featuring foods that I’ve featured previously), but the YouTubers of ArchiveLand have some to share…and share they have!

Take, for instance, the time Melissa Davis had a fender bender…

Or the time the Davis Kids (Michael and Melissa) expressed themselves through style…much to Father Davis’s delight….

And a bonus Parmesan Cheese commercial .  This time, the Davis kids want another baby!

Upload via Random Stuff I Find on VHS

These commercials are different from the one I shared on Thursday, as someone in the family always asks at the end where the dog is.  We never see the dog, and I’m pretty sure he wants no part of their commercial endorsements.

I guess the Davis Family is destined to be tucked away in the dusty file boxes of nostalgia, next to all the other long-forgotten pitch persons of products past.

Oh well.  At least there is still 4C products to be had, even if the Davis Family isn’t promoting them.

And that does it for this bonus round of 4C commercials.  Enjoy the rest of your weekend!

Ring Around The #ThrowbackThursday / #FlashbackFriday Is Unsightly! (August 4, 2018)