But if you insist on doin’ what you wanna do, read this first, if you will!

I dabble in quite a bit of diverse music on Music Monday – Christmas, Halloween, R&B, and everything in between.  We’ve listened to movie soundtrack songs, the works of Chicago a few times, delved into my mid-90s playlist, and we’ve done the walk of life.

Which I’m sure is nothing like the kind an Egyptian does.

The Beach Boys have enjoyed a career longevity that really only rivals Chicago (they’ve even collaborated with them), and while they’ve had personnel changes, ups, and downs, they’ve always been around.  Next to Jimmy Buffet, they’re probably the soundtrack of many a summer.

My one cousin (who is a Navy pilot) loved The Beach Boys as a kid, and my aunt and uncle took him to their concert one time.  As my mom said, he knew that because of his age (he’s the same age as me, but 8 months younger), he shouldn’t have known all the words to the songs.

When you like good music, you have nothing to be ashamed of.  You’ve seen how much I talk about Kenny Loggins and Chicago, right?

The group had fallen out of the charts by the mid-1970s, and hadn’t had a #1 hit since 1966’s “Good Vibrations.” By 1987, their classic music had started showing up in then-current movies, and they’d also had some success with new songs for a few other movies.  The group decided it would only be logical to repackage the classic movie-used songs with the contemporary movie-used songs, and the result was their 1989 album Still Cruisin’ (the title coming from the song of the same name from 1989’s Lethal Weapon 2).

One of the more recent songs on that album actually came from one of my all-time favorite movies. It is about a divorced mom who takes on the responsibility of mentoring a spoiled group of Southern California girls in a fictional version of a certain national organization.  It stars Shelley Long, her ex-husband is the Muffler Man, and her arch nemesis is a tough-as-nails troop leader bent on making her troop perfect little soldiers.  They’ll earn patches, sell cookies, and learn to survive in the wilds.  The wilds, of course, is outside their pampered little world. That movie, my friends, is Troop Beverly Hills.

Gaze at this oh-so-awesome trailer!

I’m not sure if I watched this movie before the 90s, but I first recall seeing it on the Disney Channel (in full) in ninth grade (which would have been 1998).  I didn’t care if I was fifteen and too old for it (I wasn’t “too old” or “too cool” for everything, you know), I loved this movie.  The fact that I didn’t try getting it sooner is weird, but I guess it fell off my teenage radar.

I used to watch this movie on Saturday afternoons at my video store job.  We were supposed to watch newer movies, but I worked midday (12-5), and 12-3 was usually a quieter part of the day.  I usually could put this one on at the beginning of my shift, have it done and out of the VCR (yes, it was a VHS copy) by 2 pm, and throw in something current until I had to put on the Ingram trailer DVD (that was played Friday and Saturday nights, to the best of my knowledge).  In 2004, I knew I needed a copy of this movie in my collection, so I ordered the DVD through work.  It took a few weeks to get it (I’m sure its extreme popularity had something do with it taking longer than a week), but it was worth it and I could watch it anytime I wanted.

I actually wrote a recap of this movie several years ago and put it on the back burner. I really should go back to it, and I’ve thought about recording it as an audio recap.  It’s one of my personal favorites, and I’ve never felt like I could relate to a movie character more than I could to Phyllis Nefler. 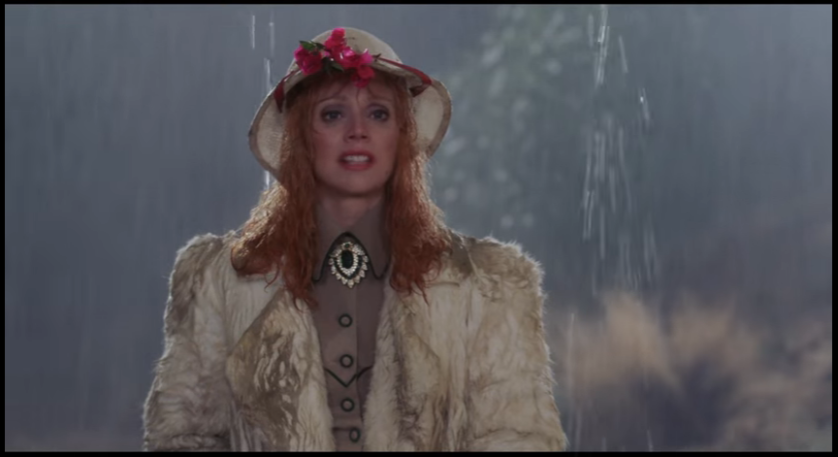 Except for camping and wearing fur.  Those are two things I would never do.

But I give her snaps for the effort!

Plus, it has this awesome opening credits sequence that is really hard not to love!

Contained within the really cool opening credits (I’m getting to that point, don’t worry), is a really good, catchy song.  Even better, it is my #MusicMonday pick for this week!

“Make It Big” was a 1989 song by The Beach Boys, recorded for the movie and included on their repackage album, Still Cruisin’.  It was track #7 (side two) of the album, but never got an official music video or single release outside of being in the opening credits of Troop Beverly Hills (itself never getting an official soundtrack release) and being on this album.  The song was written by Mike Love, Bill House, and producer Terry Melcher.  Lead vocals were provided by Brian Wilson, Carl Wilson, Mike Love, and Al Jardine.

Since the song never had an actual release, I can’t find a Billboard standing for it.  The album Still Cruisin’ reached #46 on the charts during a stay of 22 weeks in 1989.  It was released on August 28, 1989 (I didn’t know it was released this week 29 years ago, this information is coincidental!).  Troop Beverly Hills was released almost six months earlier, on March 24, 1989.  It was a critical and commercial failure, but ask anyone who was young at the time, and it is spoken of fondly.  It seems to have that 1980s Girl audience down pat.  Perhaps parents just weren’t interested in seeing it?

I won’t tell you it was the greatest movie ever (it wasn’t), but that wasn’t its intention.  What it was, however, was delightful and silly.  Shelley Long was the troop leader we’d all want, and Beverly Hills was the wilderness we’d all be ok with camping in.

The album version of “Make It Big” sounds slightly different from the version heard in the movie (no idea why), but it is awesome and has a great updated Beach Boys sound for the 80s.

It is as much fun as the movie is came from.  Click play and hear it for yourself!

And now, for those really awesome opening credits, with a slightly different version of “Make It Big.”

I love that.  Did I mention that a few times?

And there you have it, a not-so-well-received movie with a song that was part of a popular ’60s group re-emerging long past their glory years.  Not a bad deal, at least we know they still had it.

Can’t say the same about Shelley Long’s movies after leaving Cheers, but this one is still memorable.  Even if it was for her character basically being Diane if she were a troop leader.

Yeah, not picturing that either, are you?