And if you did, what brand videocassette did you capture it on?

I love George Carlin.  Despite having seen him in person toward the end of his legendary life and career in a not-so-legendary performance, I’m forgiving.  I love his fast-paced comedy and how he tells a story.  Baseball vs. Football, Stuff, Seven Dirty Words…I have a father who told me at a young and impressionable age that I would enjoy this.  I’m convinced, years later, that he felt I was the child he knew would appreciate this stuff.  Either that or he just really wanted someone to watch HBO with him.

I turned out perfectly fine.

(If my mom reads this, she’ll question that last statement, or at least the definition of “perfectly fine.”) 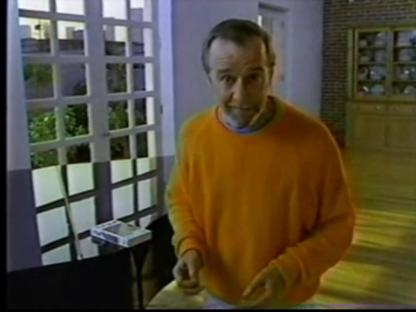 Twenty years before his death in June 2008, Carlin was a spokesperson for Fuji’s line of videocassettes, combining product pitching with his unique brand of comedy.  I found this the year before he died (not recorded on a Fuji tape!), and it reminded me all over again of what I loved best about Carlin.  If that one show I saw in 2005 was the indicator of what I didn’t like about Carlin in the later years, this was what I loved about him at his prime.

Carlin did several ads as Fuji’s spokesperson, and while they all reminded us to “put the good stuff, on the good stuff,” the rest of the commercials were all like his standup act.

I’ll leave you with the entire collection (including this one):

So don’t catch ’em red-handed using a video that’s not Fuji…unless you’re me.  I (for some reason) never used Fuji.  Don’t know why.

Have a great day, and I’ll leave you with this question: What brand of VHS was your cup of tea?

I ask because, well, the theme of this week.