That’s right, we’re going to be watching two volumes of The World of Cricket – the only two volumes in existence. 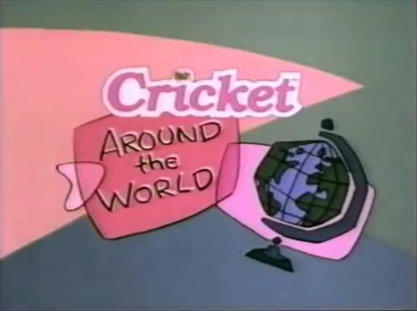 Because we’ve really moved up in the world since the 500th post AND the 1000th screenshot!

First up is “Cricket’s Clubhouse,” and following that, “Around the World with Cricket.”

Whenever you’re feeling brave and ready to conquer this, go on and click play below on the first video.  I’ll be talking to ya!

No seriously, you can see me in the corner of the screen!

I was trying to capture a moment where I looked deeply focused and not smiling, but this was pretty much the look on my face for the entire recording session. Ok, at the risk of quoting way too much Cricket speak, let’s just move on to the second video in the collection, “Around the World with Cricket.”  Fun fact – I actually owned the audio cassette/book this was adapted from.  It’s how I learned Frere Jacques.  And for some reason, I still know the Aloha song after not listening to it in 25 years.

My family does ask me about my weird memory.

Anyway…let’s watch.  I’ll be talking to ya (again)…once you click play!

You know, I’m convinced I’ll have “Aloha,” the Hi-Tops Video logo, and the Cricket’s Club House song stuck in my head for a long, long time. In some places, that is likely a crime.

Not a crime, though?  Proudly having one of these!

Ok, I don’t have an actual one, but…close enough, right?