…because it’s all a ploy to get parents to buy MORE TOYS!

So now you know this week’s theme.

In the competition of where to buy the best toys, there’s quite a few options.  And of course, if we were lucky, we usually went to Toys R Us for the stuff we played with.  There were competitors, and well…they couldn’t stack up to the god-like powers of Toys R Us.  In the theme of Toys R Us Versus The Competition, this week’s Throwback Flashback focuses on the #2 and #3 stores of their time…who ultimately lost out to Toys R Us in the end.

First up, the Massachusetts-based Child World!

Child World was founded in 1970, and at its peak, operated 182 stores, and also operated Children’s Palace from 1975 until the company folded and both stores closed.  The chain was the #2 store, behind Toys R Us.  However, by 1990-1991, a recession and lack of “must-have” toys on the market sent the company on the downward spiral that eventually caused its demise in 1992.

Today’s commercial from the archives comes to us from 1988, and a commercial for Child World.  I’m not familiar with this store being in my area (I am more familiar with Toys R Us, and to a lesser extent, Lionel Kiddie City, as that was across the street from the Toys R Us in Toms River, NJ).  This commercial aired on the New York-based WPIX 11 station, so it’s more than likely a store that was located in Northern/Central New Jersey and New York.

It’s purpose?  Not to advertise the store itself, but to tell parents to go there and get a Fisher Price Magic Scan Checkout Counter, which has everything you need for when you play store. 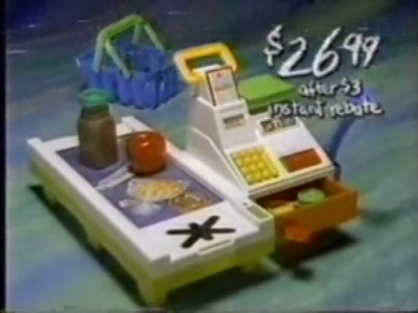 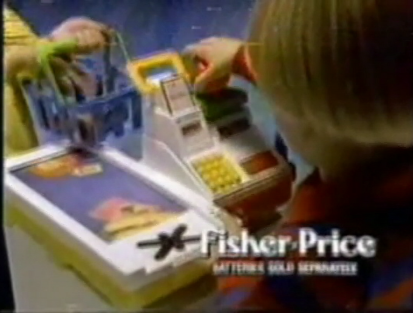 And it’s a great low price…because that $3 instant rebate is such a bargain!

And, of course, they remind you of something important: …so your parents can buy you MORE TOYS!  Because that’s all you need!

And now, click play and allow the child spokesperson to tell you all about it!

Oh, and bonuses – something we have never done before!

Here’s some related gems from the archives of others:

From You Tube User commercialclassic:

Anyone else want to know what the hell is up with Peter Panda and his voice?  Can anyone else see why Toy R Us has succeeded where Children’s Palace and Child World didn’t?

Everyone thought Geoffrey the Giraffe was voiced by Tom Hanks!

And there you have it, the #2 toy store and its creepy mascot sell toys.  It’s just that simple.

Oh, and just wait until tomorrow.  You’re gonna love the OTHER competition and it’s catchy jingle!