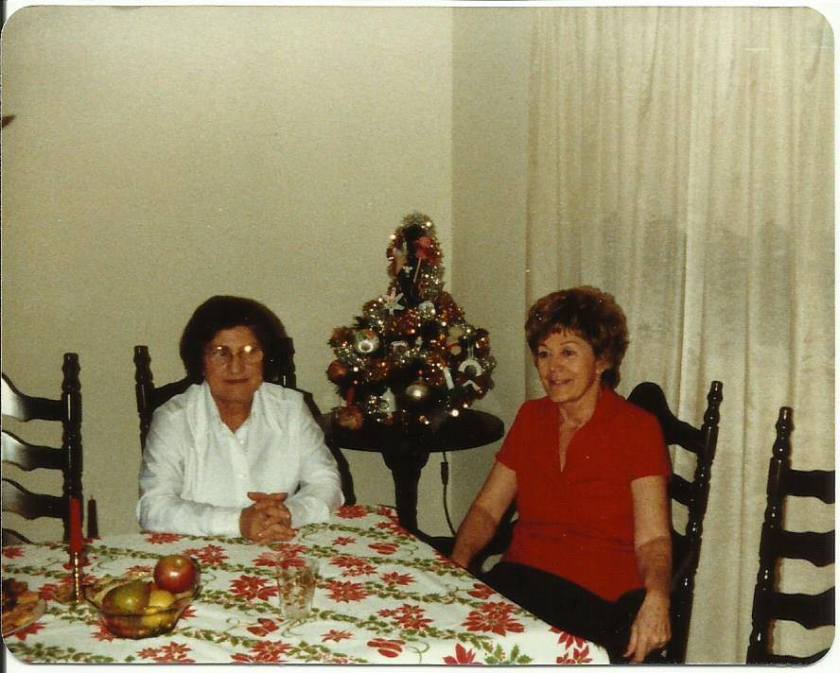 April 29, 2016 Allison L. Venezio-Preston Written From The Heart One comment

I’m so mad right now. It’s taking every effort to calm myself and force myself to relax  enough to write out my thoughts on what you’re about to read.  But, I promise one thing: I will state my opinion with the utmost dignity and respect, in the style that my readers have come to know.

If I lose followers because of this, I’m fine with that.  I’m prepared for any backlash.

But consider the subject before judging or lashing out on me or my reasons for even discussing this issue.

Alzheimer’s Disease is no laughing matter.

I’d like to introduce you to two people who are very important to me.  I say “are” because I keep them in the present.

These are my grandmas.  And they both have something in common (besides being grandmas to me and my brother): they both died from complications due to Alzheimer’s Disease.  My paternal grandmother, Mary Venezio (on the left) died in July 1994, and my maternal grandmother, Catherine Nesgood, died in February 2015.

So imagine my shock and renewed sadness to hear of a film Will Ferrell will be making, depicting a beloved American President in the throes of Alzheimer’s Disease, believing he is an actor playing a President.

Like many of you, I heard the story on the news this morning: Will Ferrell will be making a movie – a comedy, no less – where he plays Ronald Reagan as he battles Alzheimer’s and believes he is the President.  No lie, this is happening.  This – I can’t even call it a movie – thing is going to be something people will invest money in to finance, it will have people to direct, write, produce, and act in it, and it will be something that people pay money to see.  Someone is making this happen, and there needs to be a whole lot of somebodies who have to go against the idea.

I’ve gotten annoyed about lesser things involving the film industry (reboots that shouldn’t be a thing? Yeah, it’s heavily-covered territory on this blog), but I can’t keep my mouth shut about this.  I could have about the lesser things, but now I have no choice – I have to talk about how terrible this idea is.

Alzheimer’s not a joke. It’s an awful, painful, and sad way to die.  It’s undignified, and it’s a death sentence.  Alzheimer’s leaves someone a shell of the person others remember. It is an equal opportunity killer – it doesn’t care who you are, what your social status is, gender, race, or anything that makes a person what they are.  It hates a person’s brain and wants nothing to do but ravage it.  It takes away those we love, makes them forget who we are, and is merciless.  For those who live many years in this battle (like my maternal grandmother did, who survived almost 12 years from her diagnosis), it is devastating.  It mainly strikes in old age, but as I’ve found out through working in social services, it really doesn’t care about age – people who live with Downs Syndrome can begin early onset Alzheimer’s as early as their late 40s or early 50s.

The very idea of Will Ferrell depicting what can only be described as an undignified and sad illness in what is supposed to be a humorous manner just makes no sense to me.  And it shouldn’t make sense to anyone.  Ever.  No one should find the idea of this disease funny or light-hearted.  Remember the controversy in 2003 when James Brolin depicted Ronald Reagan as he (allegedly) was during his Presidency, and how the movie was pulled because of pressure?  That was a political reason.  This is a human reason.  This is that controversy times an unfathomable number.  This is beyond controversial.

Look, I don’t wish Will Ferrell ill or any harm,  he is working and doing the job he does best, and yes, I loved his portrayal of George W. Bush (as a registered Republican – and this has no political bearing whatsoever – I’ll make that perfectly clear), but I’m deeply offended by the fact that he will play Ronald Reagan in anything less than a dignified manner.  There is no way to make this any more dignified, as the damage is now done.  There could never have been dignity with the intent for this project. The mere idea indicates alot about who believed this was a good idea.  This was ground no one should have walked on, and yet, it has happened.  I’ve had mixed feelings about some of Ferrell’s work post-Saturday Night Live (I don’t like all of his movies, but there are ones I do enjoy), but I can tell you of one movie I will NEVER, EVER see in my lifetime: The time he played Ronald Reagan.

Oh, it hasn’t happened yet?  I’m aware it hasn’t.  And if the right people and organizations speak up, this will never happen.

Let me make this perfectly clear: I’m not a professional writer.  I’m not a paid writer. The work I do is on a small scale, a hobby and passion. It’s not my career.  I won’t get paid to talk about this, or anything I write about.  I write about the past and about nostalgia, but I also have a passion for certain topics, and one of them is treating Alzheimer’s patients with the dignity they deserve, and to preserve the memories and interests of anyone – and I mean anyone and everyone – but especially those with Alzheimer’s Disease, in the most loving way possible.  My grandmas can’t speak, but I can speak for them.  And they (especially Grandma Nesgood, who loved Ronald Reagan) would be offended by how Ronald Reagan is going to be depicted.  I’m actually not even sure if she knew who Will Ferrell was.

Now I will make one other thing perfectly clear, as you’re finishing reading this.  If you intend to share this with anyone, do not do it on the grounds of political views.  Do not look at this as an issue strictly in the political sense.  I don’t care about your party affiliation (but I will respect you, no matter what), and you shouldn’t think of mine when you read this.  I’m not writing this as an “Angry Republican,” and I’m not writing this as a Republican.  I’m writing this as a PERSON who loves two people very much, two people who lost their lives to something sad, something that no one should ever have to know about.

I’m just happy that these women never had to know this was even discussed.