I hate being latent, doomed to be quiet when all I wanna do is shout my geekiness from the roof tops.  I also hate when my brain is congested with illness that prevents me from writing.

As someone who lives with chronic sinusitis, what may be a simple/annoying cold for some becomes a crazy bacterial infection for me.  My sinus infections usually range from the kind where I’m vertical and functional to the kind where I put a pillow over my head and demand the world leave me the heck alone…and close the door on the way out.  I average 3-6 of these bad boys a year (I’m on my first – and hopefully, last – of the year, and for late winter, that’s impressive).  Allergy shots have dropped my overall total down to an average of three per year, which I can live with.  What I can’t live with, however, are the ones that result in insanely high fevers.  I don’t like missing work and interrupting my “second job” because I can’t think and can only see the world through headache eyes.  And forget wearing glasses, especially when they rest on your nose and feel like a five-hundred pound weight was placed on your face.

And that, my friends, is the buildup to this week’s theme.

This week, we’re going to travel back to the 1980s and watch one of those “insanely fast relief” cold medicine commercials.  I swear, it’s all a ploy to get you to spend money on stuff that won’t work nearly as fast as it is claimed.  Maybe for some, it does.  For me?  Forget it.

Today’s commercial comes to us from 1988, and is for the powerful relief of Actifed and its magical abilities to lift the fog of a head cold…and eliminate that annoying  fog horn sound you make when you blow your nose. 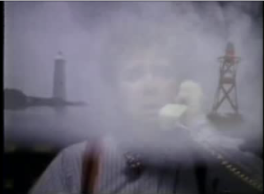 And he has a cold.  A terrible, horrible head cold.  He’s sneezing, he’s blowing his nose…and every time he does, he sounds like a fog horn.  He sounds terrible.  I mean, how bad does this have to be for you to sound like a fog horn?  Isn’t that something a doctor should check?

Watch it come through the fog like a ship on a mission!

Watch it lift his fog!

Watch him be able to power through his day at his respectable job…all because of ANTIHISTAMINES!

You’d think that was a new concept, the way that bandy that stuff around. 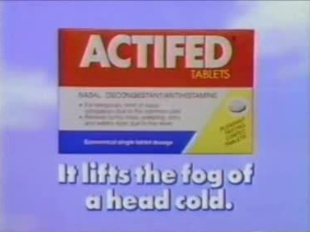 And now, watch the power of medicine delivering promises, when you so choose to hit play.

Whoomp, there it is!  It says it works, and maybe it does.

And there you have it – your first brush with relief for the week.  But, be sure to come back tomorrow for another dose of your medicine.  Because you want to feel better, don’t you?