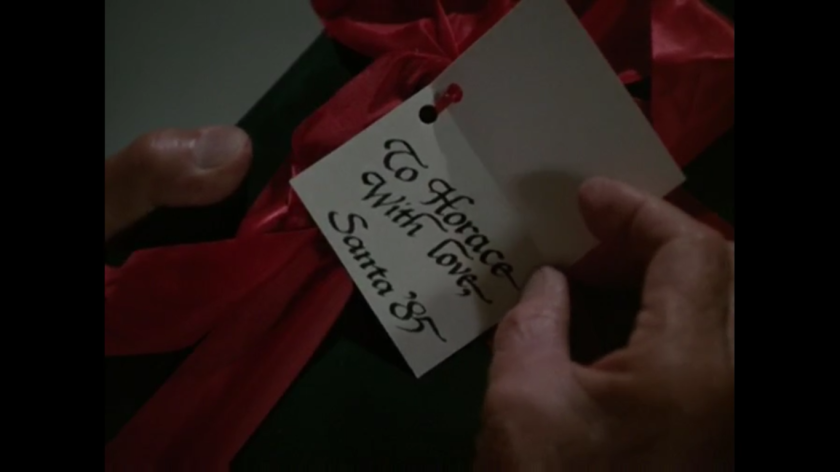 Not all Christmas viewing has to be of one-off Christmas specials.  Sometimes, the best Christmas stuff is what’s embedded within shows we already watch.

One show that I’ve always had a particular fondness for is the anthology show Amazing Stories, which was created by Steven Spielberg, and aired on NBC from 1985-1987.  It was both like and not like your typical anthology series (think a lighter version of The Twilight Zone or The Outer Limits).  The stories were whimsical and family-friendly, the endings happy.

My earliest recollection of seeing this show was one of the “movies” that aired sometime in the late 1980s – it was the episode “Remote Control Man,” and the scene with the garbage disposal was embedded in my mind until many years later, when I re-discovered the show on Encore, and later, on the Sci-Fi Channel.

Amazing Stories, like any other good series, had a Christmas-themed episode in its midst, and like all the other episodes before and after it, it was whimsical and light, if not a sign of the times.

What happens when Santa Claus, still clinging to the magic of his symbolism, is treated to the paranoid sign of the times?

The result is the first season Amazing Stories episode “Santa ’85.”

It’s Christmas in 1985, and the world has changed.  But Santa Claus doesn’t believe this.  And while he may have gotten with the times, he still assumes the world believes in him and his magic. 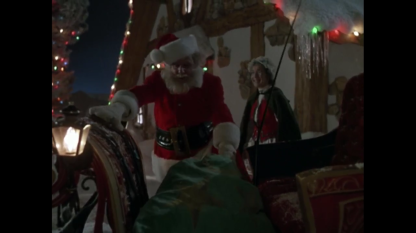 We then meet the Mynes family, whose eight-year-old son, Bobby, was told by some older kids that Santa Claus isn’t real.  Bobby is insistent to his parents that Santa does exist, and his parents, in the reassuring way they’re supposed to, engage his young mind to help him believe in the magic…but not before telling him he has to go to sleep.

Santa Claus arrives at the Mynes home and finds that the chimney is blocked, so he does the reasonable thing and enters through the back door.  That’s fine and all (it’s how Santa came into my home when I was little, after all 🙂 ), but there is a bigger problem – the Mynes’ security system is tripped.  Santa tries to finish leaving gifts, but must make a quick exit (but not before Bobby shoots a suction cup-tipped projectile at him), manages to get out the front door…but is promptly arrested by Sheriff Horace Smyvie and Deputy Weatherby. 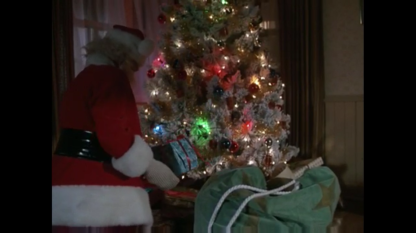 Santa is tossed into jail with several other “Santas” who all played the part with more nefarious intentions.

Sheriff Smyvie is unimpressed with Santa’s attempts to prove who he really is, and it turns out that as an orphaned child, Smyvie was deprived of the gift he truly wanted in the whole world for Christmas in 1933 – A Buck Rogers Laser Gun.  So if he seems a little hardened toward the whole magic of Christmas, he may have a perfectly good reason.  In fact, I’d say he’s a little bitter and resentful toward a symbolic figure that confesses to having made a mistake.

Bobby is determined to save Christmas and break Santa out of the pokey, and being an eight-year-old boy, the magic of Christmas should mean the world to him.  So he puts on his best camo gear, exits through his bedroom window, and rides Santa’s sleigh to the jail.

All sounds like something a child is capable of doing, right?

Bobby tells Santa he’s going to help him escape, and ties a rope to the bars on the jail cell window.  Just as Sheriff Smyvie and Deputy Weatherby come to confront Santa as to his true identity (after his arrest paperwork indicates no fingerprints…despite there being ink in the pad), and find the jail cell wall being broken down, the drunk Santas escaping, and Bobby in the sleigh to bail Santa out of his predicament.  After all, he has gifts to deliver and a tight schedule.

Oh, and this is a family show, so of course, the kid has to save the day.  All as his unsuspecting parents sleep.  We never do find out if Bobby makes it home safely.  We’ll assume he does.

But it’s Sheriff Smyvie who has his faith restored in The Magic of Santa, as his long-awaited gift literally drops into his hands from Santa’s sleigh…the Buck Rogers Laser Gun he coveted as a child.

His gift may have arrived fifty-two years too late, but it arrived.  And Smyvie is happy with this.  And childhood-like faith restored, he joins carolers as they make their way through the snow.

Which leaves me with an important question: Exactly what time did Santa arrive at the Mynes’ house, and how late at night are the carolers out caroling?

“Santa ’85” was the eleventh episode of Amazing Stories’ first season, and aired on December 15, 1985.  Amazing Stories was one in a long line of anthology shows, with a different stories and characters each week, but sadly, was one of the more underrated of the lot of anthology shows before it.  The show ended in 1987 after two seasons, when NBC decided not to renew it after its two-year contract expired.  Despite having the creative backup of Steven Spielberg and his team of writers and people (most of the names involved here are ones you’ll spot in the credits for his most notable films of the 1980s), the show was never a ratings hit.  Unfortunate for something that really had the potential to be a fun series, it’s actually a gem for what did air.

And it had a cool theme song and introduction.

Episodes for the show have since been released to VHS, DVD (first season only in the United States) , and streamed on Netflix for a time.  As I said, years ago, I saw reruns of the show on Encore and the Sci-Fi Channel (before it dropped the ” double i” and adopted the “double y,”) but it never aired on any kind of consistent schedule, and was usually part of day-long marathons when the Sci-Fi Channel used to have them.  Those marathons peaked my interest in the series, and it’s safe to say that while I likely haven’t seen every episode, I’ve seen most of them.

I actually just came across the first season streaming on NBC’s website, and if you’ve never seen this show before, I highly recommend checking it out.  The real shame is that the second season isn’t available, but perhaps sometime down the road, it will be.

The Magic of Christmas and all, remember?

And if you have the chance, check out this gem of a Christmas story, it’s worth your time (and at 25 minutes, it’s a quick watch).  Just click on the embedded link below to open the video player.

We’re early in the holiday season, and the fun just keeps right on coming on Allison’s Written Words – please stick around! 🙂

Oh, and have a little faith in The Magic.